Collect the highest value set of matching relics! Players start the game with 200 points and play multiple rounds.
At the end of each round, the player who has collected the highest value set (all four cards) of relics is the round winner.
The cards each losing player finishes with determines how many of their points they give to the winner of that round.
The first player to reach 400 points is the overall winner.

The active player must either discover or forage for a card on their turn. They may not pass. 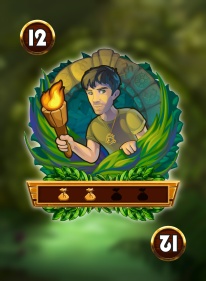 Once all participating players have placed their thief cards face down in front them, flip the thief cards over to determine who will steal the next player's turn.
> If only one thief is played, they automatically win the turn.

> Otherwise, the highest class of thief shown (given by the number on the corner of the thief card) wins the turn.

> If multiple thieves are shown with an equally high class, the thief amongst them with the most money bags is the winner.

Each losing player gives some of their points to the winner - calculated as the sum of the unique values of all the cards (both relics and thieves) they finished with. 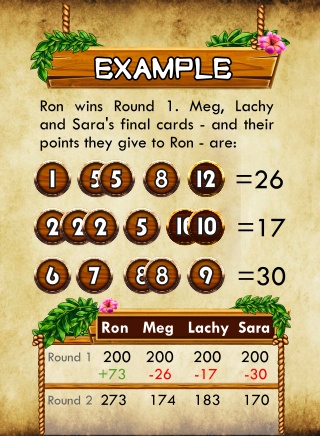