Each player starts with a set of random cats that vary in attractiveness. Everyone is trying to match their cats with as many  attractive partners as possible!

Each round, one player's cat becomes the 'proposer', and the other players privately select one of their own cats as a candidate to match with them. Players may say anything they like to the proposer in order to convince them to consider their cat over the others.

The proposer consecutively inspects each candidate once, and the round will end for the proposer either with a Purrfect Match...or with Loneliness.

Shuffle the 36 cat cards and distribute them all equally to each player, face down. If there are any excess cards left over, discard them, ensuring the card faces are not seen by any of the players.

Each player inspects their hand of cards they have received and privately records the sum of all of their cat's attractiveness values (the values range from 1 to 10). This number is the player's target, which will be used to calculate their final score once the game ends.

Choose a player to be the first proposer.

Each round, the proposer chooses one cat from their hand and publicly displays this card to the other players.

Players who have not yet played a cat from their hand (a 'candidate') that they would be willing to match to the proposer's cat do so now. Each candidate card is placed face down in front of the player.

In a clockwise order, the proposer consecutively inspects each player's candidate card privately. They then decide if they want their cat to "propose" to that candidate or not.

Once a proposal is accepted by a candidate, the pair of cats are now a Purrfect Match! The proposer and candidate players exchange their matched cards and place their newly claimed card in front of them so everyone can see it - the claimed card is added to their score and is no longer used for the rest of the game.

A proposer may not go back to a candidate they have previously failed to match with in the round. If a proposer does not match with any of the candidates in the round, then the round ends and the proposer card is discarded. They receive no points.

Each candidate card is returned to their player's hand and may be used again in subsequent rounds. The player to the left of the failed proposer becomes the proposer in the next round.

The game ends when no more matches are possible between players (a player cannot match their own cats to each other).

Once a player has no cards remaining they sit out until the game ends. If the last player still holds unmatched cats when the game ends, these are discarded and do not contribute to that player's score.

Each player's final score is simply the total value of the matched cards they have collected, minus their original target. The player with the highest final score is the winner! 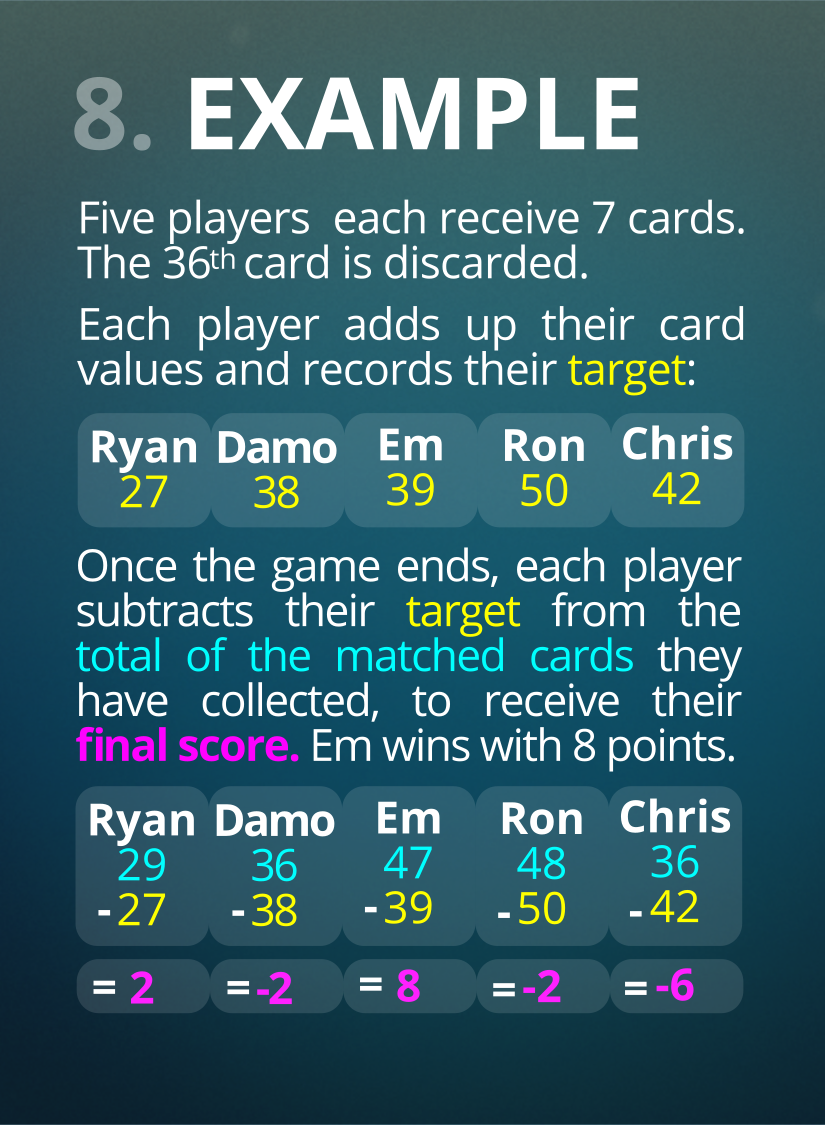